The End Is Near…

…. at least as we know it now. After three years on the forefront of the downtown Albany art scene, the Amrose Sable Gallery is shuttering its doors at 306 Hudson Ave., Albany. Owner Elizabeth Dubben is hosting one final exhibition at the gallery, “Way Out,” by photographer-turned-collagist Robert Gullie. “Way Out” opens with a reception with the artist at 5 p.m. Friday, May 1 and will remain on exhibit through Sunday, May 24, which will mark the closing of the gallery.

Since first opening its doors with an exhibition by Albany painter Erik Laffer in June 2006, Amrose Sable has exhibited works by such Capital Region artists as Wendy Ide Williams, Bill Wilson, Robert Cartmell, Gina Occhiogrosso, Sergio Sericolo, Ken Ragsdale, Chip Fasciana and others. In addition, the gallery has served as a performance space for concerts, readings, film screenings and pot luck dinners.

Dubben insists that despite the gallery closing, this isn’t the end of Amrose Sable, although its next incarnation is still up in the air. “The gallery business will remain active while undergoing this transformation,” she writes. “Look for our new blog, updated website, events and exhibitions at alternate locales this summer.”

In the meantime, check out the Guille show and wish Elizabeth good luck in her upcoming artistic ventures because Nippertown just won’t be the same without Amrose Sable. 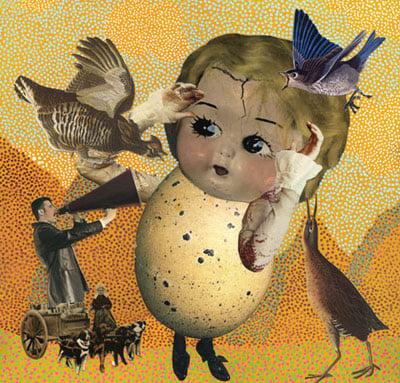 PAUL JONES: “Starting All Over Again”

Albany Barn Makes “Fusion” a Weeklong Celebration of the Arts

The Tang Museum Frames the Cosmos for Us

The Tang Museum Frames the Cosmos for Us