BOB DYLAN’s “Together Through Life” 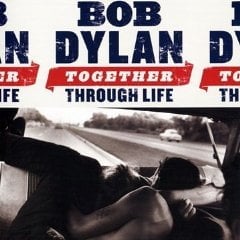 (Columbia, 2009): I always end up approaching a new Dylan album with palpable excitement leavened with just a pinch of fear of disappointment. “Together Through Life” is his 33rd studio album, and on the first couple of spins, it’s easy to listen to, but hard to hear. The basic blues format that dominates the 10 songs makes the music sound deceptively simple. Dylan’s sandpaper growl glides casually, almost effortlessly over the lyrics (all but one co-authored by longtime Grateful Dead wordsmith Robert Hunter), making them initially difficult to digest. Granted there’s no surreal, subterranean homesick poetry here (although he does manage to namecheck both Billy Joe Shaver and James Joyce in “I Feel a Change Comin’ On”), but there’s more than meets the ear. The album was alledgedly spurred by the album’s second track, “Life Is Hard,” which Dylan wrote for the upcoming film, “My Own Love Song,” directed by Olivier Dahan (who also helmed the Academy Award-winning “La Vie en Rose”) and starring Renee Zellweger and Forest Whitaker. Ironically, that delicately spun ballad seems to stand apart from the rest of the blues-oriented tunes. Produced by Dylan (pseudonymly as Jack Frost), the new album’s musical muscle is anchored by Los Lobos’ David Hildalgo, whose accordion playing slathers a wistful Tex-Mex feel over nuggets like the strolling “This Dream of You” and “I Feel a Change Comin’ On.” Tom Petty’s right-hand guitarman Mike Campbell also beefs up the band nicely, but let’s face it, this is a Dylan album, and the band really just serves as window dressing. “Together Through Life” won’t convert any non-believers, but the faithful – myself included – will be rewarded with repeated listenings.

Bob Dylan: Together Through Life