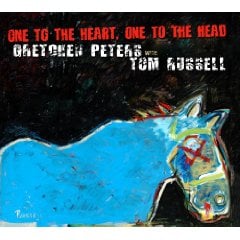 (Scarlet Letter Records, 2009): Peters is best known as a country songwriter, penning tunes for such chart-toppers as Trisha Yearwood and George Strait. She earned song of the year Grammy nominations as the author of Martina McBride’s empowering “Independence Day” and Patty Loveless’ hit “You Don’t Even Know Who I Am,” but her songs have also been recorded by the likes of Bryan Adams and Bonnie Raitt, and Peters is quite successful on the singer-songwriter scene, delivering her own tunes.

So this album is an unexpected left-hand turn – teaming up with roots tunesmith Tom Russell for an album of cover songs. Of course, they dip into Russell’s songbag for “Guadalupe,” but on this collection of Tex-Mex flavored border songs, even the big-name cover songs are unexpected. If you’re gonna tackle Dylan, you’re not likely to dig into “Billy 4” from the “Billy and the Kid” movie soundtrack, but that what Peters does, and the results are just fine indeed. Other tracks come from such excellent songsmiths as Townes Van Zandt, Rosalie Sorrels, Ian Tyson and Mary McCaslin. A very intimate, deliberate, intelligent roots-folk album.

Kathy Mattea, What Was The First Album You Ever Bought?