Hey, just a few nights ago, I settled back and watched the DVD “Classic Albums: Apostrophe (‘) and Over-Nite Sensation,” and it was a stone gas. 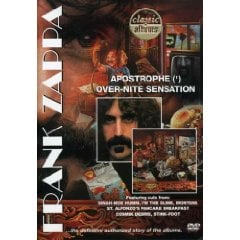 Lots of old interviews with Frank Zappa and live footage, too. (Remember “I Am the Slime” from Zappa’s 1976 appearance on “Saturday Night Live”? It’s here, complete with the Don Pardo spoken word section.) Lots of recent interviews with the bandmembers from those early-’70s Zappa bands – including George Duke, Napolean Murphy Brock and Ruth Underwood. And lots Dweezil sitting at the mixing board, dissecting the music track by track – really fascinating.

Every once in while, there was footage of Dweezil onstage, too, leading his tribute band Zappa Plays Zappa, as they cranked out an Frank nugget. I got all wistful (or was that wasteful?) about the sold-out ZPZ show at The Egg last year. “Sure would love the opportunity to catch that band in action again soon,” I thought. “I mean, it’s not like I’m going to have the chance to ever see Frank again.”

(Of course, there was that time back in ’69 when Zappa and the Mothers played the University at Buffalo’s Clark Gym and brought out Simon & Garfunkel for a set of old doo-wop tunes. But that’s a story for another time.)

Anyway, the next day I find out that ZPZ is coming to the Palace Theatre on Tuesday, August 4 as part of the second annual Progressive Nation tour with Dream Theater, Pain of Salvation and Beardfish. How lucky am I? Maybe I’ve got the shining.

Tix for the Palace show go on sale Friday, May 15.

Oh, and one more little tidbit that I learned watching the DVD? The back-up singers on “Over-Nite Sensation” were the uncredited Tina Turner and the Ikettes. Whoa…

No Children of Bodom in Albany