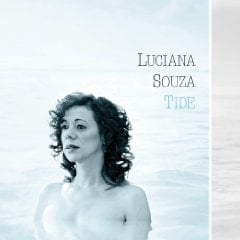 (Verve, 2009): If Melody Gardot’s new album resonates deeply with the most lush, orchestral side of Joni Mitchell, Souza’s latest album conjures up the sound of a neo-bossa nova Mitchell. No surprise there since Larry Klein (Mitchell’s ex-husband and producer) is at the helm for both the Gardot and Souza discs. The difference here is that Klein’s also got his feet planted deeply in the songcraft as well, earning co-songwriting credits on six of the 10 songs here – and playing bass on nine of them, too. It’s been a decade since her debut, but Souza just keeps getting better – aided and abetted here by such keystone collaborators as multi-keyboardist Larry Goldings and the lower-case, major-talent poet e.e. cummings, who lands songwriting credits for a pair of songs, including the hypnotic ebb ‘n’ floe of the title track.