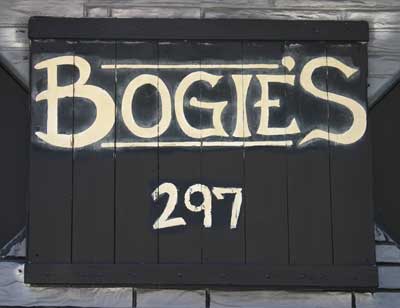 The site of way too many nights of great music – certainly more than I can possibly remember.

Bogie’s was there before Blotto recorded our first vinyl, and it was still there so many years later when Blotto released our first CD.

Now, after a loooooooooong hiatus, Bogies (the apostrophe is apparently optional) is back again . Yes, with the fine folks of Black & Blue Productions at the helm, Bogies celebrates its official grand re-opening with a crank-it-up-to-11 bash on Friday, June 5.

Sleaze-rock kingpins the Erotics headline the festivities with plenty of sonic support from the likes of Horror Business, Hijinx, Society High and Pistol Shot Gypsy. It all gets underway at 8pm, and admission is $10.

I still vividly recall the Units at Bogie’s funking up a version of “Ease on Down the Road” from “The Wiz” during the Labor Day weekend of 1979.

And Albie from the Black Fuel has a whole mess o’ fond memories of the old Bogie’s.

What are your fave Bogie’s shows of ye olden days?

Real Good for Free: Rockin’ on the River, Troy