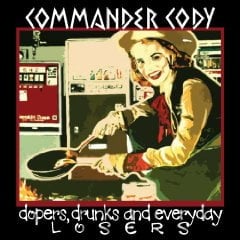 (Blind Pig, 2009): Since the Lost Planet Airmen flew off into the sunset, the Commander’s musical career has been hit and miss, and this one’s better than most.

This time around – his second stint with the folks at Blind Pig – Cody revisits a lot of his back catalog. Unfortunately, the remakes of both the Airmen songs (“Wine, Do Yer Stuff,” “Semi Truck” and “It’s Gonna Be One of Those Nights”) and tunes from his early solo albums (“Lone Ranger” and “Seven Eleven”) suffer by comparison to the originals.

The problem is primarily due to lackluster vocals, which are desperately in need of some of the wild abandon that Billy C. used to throw down. Guest vocalist Circe Link steps up to the microphone for the classic “Down to Seeds and Stems Again,” and while she certainly won’t make you forget the original version, it might have been a good idea to give her a go at some of the other selections, too.

The new material fares best here, whether it’s a cover of John Hiatt’s rousing on-the-road gem “Tennessee Plates,” the swingin’ end-of-the-night honky tonker “Last Call for Alcohol” or the hard-to-believe, semi-mariachi version of “The No No Song.”

The Commander will be doing a rare solo performance at Alchemy in Woodstock on Saturday, June 6, splitting the bill with a solo shot from Aaron “Professor Louie” Hurwirtz, who also served as co-producer and organist on this album.