BETTYE LaVETTE’s “Do Your Duty” 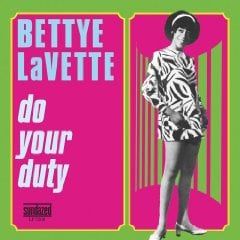 (Sundazed, 2009): With the resurrection of sublime ’60s soul singer Bettye LaVette’s career in recent years (the stunning Joe Henry-produced 2005 comeback “I’ve Got My Own Hell to Raise,” and the 2007 follow-up “The Scene of the Crime”), it was inevitable that some of the nearly forgotten recordings from earlier in her career would once again see the light of day.

Of course, it wasn’t a given that they would be so lovingly collected as they are on this compilation from the Coxsackie indie label Sundazed. There are 11 solid tunes here – including “Games People Play” and “Piece of My Heart” – that she recorded in 1969-1970.

They’re all top-shelf, collected here for the first time, as LaVette splits the difference between the smoulder of Dusty Springfield and the sass of Tina Turner. Hot stuff.

LaVette steps into the spotlight at Freihofer’s Jazz Festival at the Saratoga Performing Arts Center in Saratoga Springs on Sunday, June 28.

Bettye LaVette: Do Your Duty

Kim Simmonds, What Was the First Album You Ever Bought?