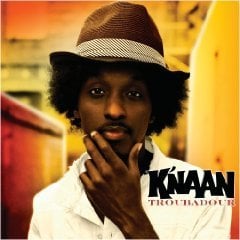 (A&M, 2009):
Having survived his youth spent in war-torn Somalia, K’Naan’s substantive brand of hip-hop is thankfully about so much more than the usual endless parade of bling and gangbanging. Guest rappers like Chubb Rock, Mos Def and Chali 2na drop by to good effect – but so too does Maroon 5’s Adam Levine (oh no!).

Best of the batch? The star track on K’Naan’s major-label debut disc is “If Rap Gets Jealous,” which pits the talented African rapper over the guitar churn of Metallica’s Kirk Hammett and Living Colour’s Vernon Reid.