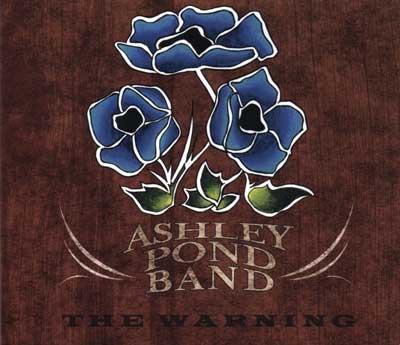 (No label listed, 2009): There was an exquisite, slowly swirling sense of mystery that permeated Ashley Pond‘s 2007 debut, “Dala” on the Rev Records.

On her new sophomore effort (with now finds her banded together with bassist Sarah Clark and drummer Scott Smith), the air remains thick and dark. And that’s a good thing.

As strong as “Dala” was as a first effort, “The Warning” is better – more confident, deeper, richer – without sacrificing the debut’s captivating charm.

At her heart, Pond is a blues singer, but she only hits you over the head with it on the album’s title track, a John Lee Hooker-styled boogie that seems a bit out of place – or perhaps just too obvious and cliched – in the midst of the rest of this hypnotic album.

Pond’s attitude sports more sway than swagger, and as a vocalist she has much more in common with Cowboy Junkies’ Margot Timmins than a classic blues shouter like the late great Koko Taylor. That’s not to say that you won’t hear ’70s-styled blues-rock mannerisms sprinkled throughout – especially on “The Dirt” and the churning “The River” – but the trio makes them distinctly their own.

The Ashley Pond Band celebrates the release of “The Warning” with a party and performance at Valentine’s on Saturday, June 13. Joining in the festivities will be Space Lounge and Ben Karis-Nix.

With Rob Jonas celebrating the release of “Take Me Anywhere” downstairs at Valentine’s, Saturday night turns into a double-barrelled party.

And violinist Meg Prokorym will likely be getting a lot of exercise running up and down the stairs – she played on both Jonas’ and Pond’s CDs.

Take It From The Top: Rosanne Cash