The Reveling rolls into Valentine’s in Albany tonight (Friday, June 12), and if the guy behind the drum kit looks kinda familiar, well, he might be. Last month he sent a shockwave through the rock world when he moved onto E Street – taking his dad’s place behind the drums in one of the biggest rock bands on the planet.

His name is Jay Weinberg, and his dad Max was out in Cali at his day job – leading the band on the new “The Tonight Show with Conan O’Brien.” So 18-year-old Jay took over for his first-ever full show with Bruce Springsteen and the E Street Band in front of a sold-out crowd at the Times Union Center on Thursday, May 14.

By all accounts he did a mighty fine job.

Earlier this week, Springsteen and band wrapped up their European tour and flew home. But there’s no rest for Weinberg, who is immediately jumping back into his other band – a noisy little punk combo named the Reveling. Tonight the Reveling tears into Valentine’s, the first stop on a quick week-and-a-half tour. 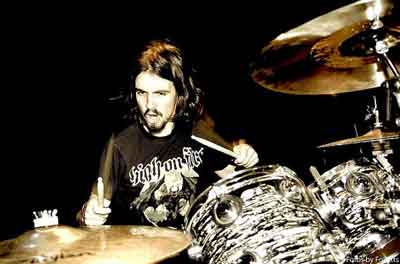 The Reveling came together two years ago, when Weinberg answered a Craigslist ad and joined guitarist-vocalist Sean Morris, guitarist Dave Kramer and bassist Dennis Murphy. Here’s what their website has to say:

“We are the Reveling. We live in New York City. We like Guinness and doing it ourselves. We try to play our songs right all the time, but really, the odds are against it.”

Joining the Reveling tonight at Valentine’s are the Younghearts, Smittix, THC in the Sex Lounge and PNC.