I’ve been reading rave reviews of “Anvil! The Story of Anvil” for months now, patiently waiting for a chance to see the film. And now, lo and behold, my patience has been rewarded.

“Anvil! The Story of Anvil” opens at the Spectrum 8 Theaters in Albany today. Thank you, Spectrum. You can view the official trailer here.

Louder, faster and heavier than the rest, the Toronto band of metalheads had a brief moment in the sun – at least up in Canada – in the early ’80s, but they never quite achieved big-time rock & roll success.

Today Anvil is still at it – plugging away, pounding away – more than 30 years later, refusing to give up the rock & roll dream.

Directed by Sacha Gervasi – who was a roadie for the band back in the ’80s – the film is full of intimate insight and a surprising amount of tenderness, too.

Full disclosure: Back in the ’80s, my band Blotto and Anvil were labelmates on the Canadian record company roster of Attic Records. In fact, we were shared the grooves on Attic Records’ 1984 compilation album, “Metal For Breakfast.” 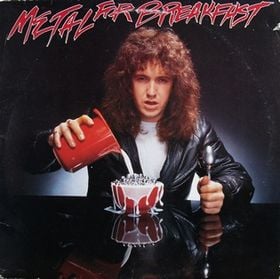 Yeah, definitely one of my all-time favorite album covers.