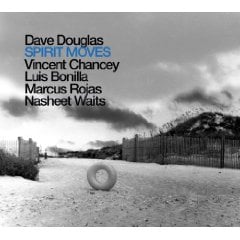 Dave Douglas is back with yet another new record. After releasing killer albums with his “Keystone” and “Quintet” groups in the past two years, the trumpeter has just released “Spirit Moves” with his five-piece brass ensemble – Brass Ecstasy.

While the material is what one would expect from the prolific composer – eight original compositions plus an eclectic selection of covers including Rufus Wainwright’s “This Love Affair,” Otis Redding and Steve Cropper’s “Mister Pitiful” and Hank Williams’ “I’m So Lonesome I Could Cry” – the instrumentation is a departure from his previous ensembles. Douglas’ trumpet is joined by french horn, trombone, tuba and drums, played by Vincent Chancey, Luis Bonilla, Marcus Rojas and Nasheet Waits, respectively.

Be Here Now: The DownTown Ensemble at the Brick Elephant