Tim Warren, what’s in the toolbox? 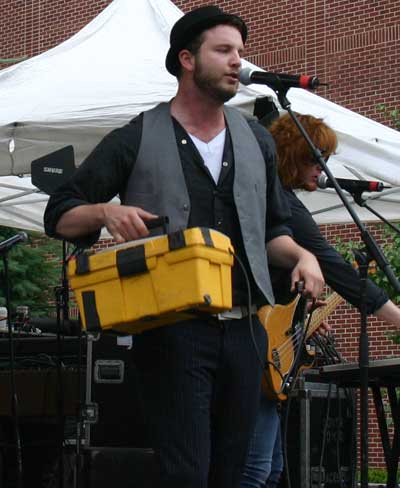 If you were at the River Street Festival in Troy early enough last Saturday, then you probably caught the fest’s opening set by the Alternate Routes.

The Connecticut roots-rock quintet wrapped up their excellent set with their current radio hit, “The Future’s Nothing New.” Lead singer Tim Warren beefed up the song with some powerhouse percussive punctuation – shaking a toolbox that was outfitted with a pickup.

So after the show, we just had to ask the obvious question – Tim Warren, what’s in the toolbox?

“Oh yeah, there really are tools in the toolbox. And, of course, they get put to use quite a bit when we’re out on the road, and not just on stage.

But if we crank it up in the sound system, it really turns heads, which is a good way to grab the crowd’s attention, especially because right now we’re out there as the opening act for a lot of bigger shows.”

Thanks for clearing that up, Tim.

Be Here Now: The Ashley Pond Band @ Alive at Five