Oh yes, we certainly do love our bobbleheads here in Nippertown. So if you’re hosting any kind of major event, a good bobblehead giveaway is pretty much guaranteed to put it totally over the top.

The Tri-City ValleyCats got off to a bit of a soggy start when their scheduled 2009 home opener at the Joe was rained out last Saturday. Hopefully the gods will be more forgiving on Thursday, June 25 for the newly re-scheduled opener.

And while we all love a good game of minor-league baseball at the Joe, there is one question that’s been on the tips of the tongues of all of the fans – when are the bobblehead giveaway nights? And, more importantly, whose heads will be bobbling this year?

Well, Governor David Paterson will be the first lucky person enshrined in bobbleheaddom with a giveaway slated for Monday, June 29 at the 7pm home game against Vermont. Of course, somebody is going to send one down to Fred Armisen, right?

The explorer, river-namer and all-around great guy, the late great Henry Hudson gets all bobbleheaded up for a special quadricentennial celebration giveaway on Sunday, July 12 for the 5pm game against Oneonta.

And while we here at Nippertown.com have absolutely no idea what America’s First Lady has to do with minor-league baseball at the Hudson Valley Community College, they’ll be giving away little head-bobbling Michelle Obamas at the game against State College at 7pm on Thursday, July 16.

And finally, wrapping up the bobblehead season at the 7pm Saturday, August 22 game against Vermont at the Joe, the Valleycats will celebrate Nippertowns most honored celebrities with Weatherman Bobblehead Night. At first I thought they were just going to giveaway a bobblehead of some generic, we-all-look-the-same weatherman.

Ah, but, oh no. Apparently, there was some kind of an election, kind of like the presidential election or that American Idol thing, and the winner was … drum roll, please … Steve Caporizzo from WTEN-TV. Either Bob Kovachick or Adam Lambert came in second place, but there’s been no outcry for a recount, so apparently the voting is now final and those results will stand. 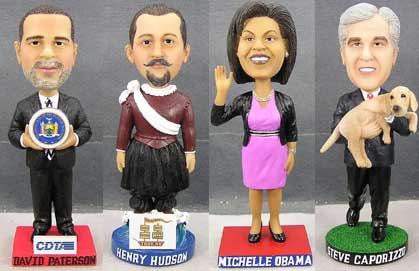