INTERVIEW: The magic of Gary Burton and guitars

But certainly one of his greatest talents is the very special knack that he possesses for discovering guitarists and transforming them into six-string phenoms.

“Sometimes they find me – Pat Metheny, for instance,” Burton points out. “Pat was a teenager when he approached me at a college jazz festival out in Kansas. He said, ‘Hey, I’m your biggest fan. I know all of your songs. I want to play with you.’ And that’s how that started.

“Other times, I was fortunate enough to discover players at Berklee School of Music,” the Boston college where Burton was a fixture, first as professor and later as dean and administrator, for more than 30 years. “A lot of the really talented young players from all around the world show up at Berklee before anyone else had a chance to see them. And that’s how I found John Scofield and Kurt Rosenwinkel and a few others.

“And sometimes I do just go after them – Julian Lage, for example, who I saw on the television broadcast of the Grammy Awards show when he was just 12 years old. I thought to myself, ‘Wow! This kid can actually play.'”

The sonic combination of the vibes and guitar seems to be a magical match in Burton’s hands.

“There is a sound thing that happens with the vibes and the guitar,” he explains. “The instruments don’t sound alike, so you can hear the vibes separately from the guitar, and you can easily identify both instruments individually.

“But if you play vibes and guitar in unison, they blend together into a new kind of sound that you might call ‘the guitar vibes.’ It’s a full, fat sound that gives you a strong ensemble alternative to just the two separate voices. As instrumentation in a small group, the vibes-and-guitar combination is very versatile. You can make it work in those two different ways in a lot of different settings. 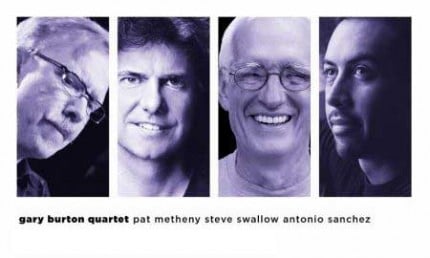 While Burton may very well have mastered the sound of vibes and guitar in tandem, he’s quick to point out that he didn’t invent it.

“I wish I could take credit for coming up with the idea. But in fact my very first professional job when I was 17 years old was when I was hired by the Nashville guitar player Hank Garland, who wanted to make a jazz record for his label, CBS. So I spent the summer after I finished high school living in Nashville and playing with him in a club on weekends. And that’s when I was introduced to this special instrumental sound of the vibes and guitar. It was just something that Hank imagined.

“There were no vibraphone players in Nashville at the time. So Hank put the word out, ‘Hey, I’m looking for a vibraphone player to use on this record. Anybody got any suggestions?’ Lucky for me, another Nashville musician – saxophonist Boots Randolph – knew me and recommended me to Hank. That’s how it all came together for me – a real back-door entry into the jazz world, to be sure.”

The Gary Burton Quartet Revisited – featuring Pat Metheny, bassist Steve Swallow and drummer Antonio Sanchez – will be playing at the Freihofer’s Jazz Festival on the mainstage at SPAC in Saratoga Springs on Saturday, June 27.

You can also hear the same band on the recently released CD, Quartet Live