JIM GAUDET AND THE RAILROAD BOYS’ “So Far So Good” 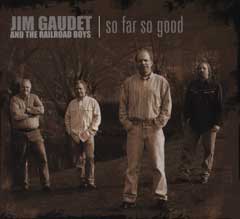 In the case of the new album from sublime roots singer-songwriter Jim Gaudet, “So Far So Good” just doesn’t cut it as a title. Really. He should re-name this sucker, “The Good Just Keeps Gettin’ Better.”

One of Nippertown’s very finest songwriters, Gaudet has a knack for crafting a mighty memorable melody – the kind that’ll get you singing along even on first listen. His delivery is wry and witty, often saying just as much with his pregnant pauses as he does with his lyrics. And lyrically, he’s poetic, literate and more than just clever.

After a string of excellent albums that culminated with “Give Up the Ghost” on the Prime CD label in 1998, Gaudet dropped out of the music scene for nearly a decade, but he came roaring back with with the sparkling “Re-Calling It Quits,” one of the best discs of 2007.

And fortunately we didn’t have to wait long for the follow-up, and this one is undoubtedly headed for the 2009 Nippertown Top 10.

While Gaudet fans will embrace the new CD with plenty of enthusiasm, “So Far So Good” is actually something of a departure from Gaudet’s earlier albums.

For one, this is a true band effort, and as befitting the first credited to Jim Gaudet and the Railroad Boys, the Boys – bassist Bob Ristau, mandolinist-lead guitarist Sten Isachsen and fiddler Tim Wechgelaer – get plenty of opportunity to shine in the spotlight.

Secondly, the album leans away from Gaudet’s usual folk-oriented approach and heads straight into high lonesome bluegrass territory. And these guys nail it. The vocal harmonies simply soar on original gems like “Get Up John” (not the bluegrass classic), “Jealous Heart” and the traditional “Hand Me Down My Walking Cane.”

But this isn’t just strictly a bluegrass album – not by any means. You’ll also find some whiskey-soaked roadhouse honky-tonkers (“Drive” and the love-gone-wrong nugget “Mind Over Matter”), a couple of chuggin’ train songs (the opening “Born to Be Lonesome” and the closing “Railroad Kill Bill”), some country twang (“Callin’ My Name”), a bit of finger-picking folk (“This Time”) and even some heavenly gospel (Gillian Welch’s “By the Mark,” the only cover song on the album).

In short, Gaudet has never sounded better or more confident. His voice is strong, and he takes more chances with it. Compare the title track with the version that Gaudet recorded for his 1994 album, “It’s a Colorful Life,” for example.

Much of the album was recorded live in Bender Studios in Delmar – the musicians playing all together at the same time, rather than layering on the one-at-a-time overdubs. And it shows. The proof is in the rich, warm, organic sound, which brings out the best in these stellar songs.

Jim Gaudet and the Railroad Boys celebrate the release of “So Far So Good” with a party and performance at the Ancient Order of Hibernians Hall (375 Ontario St., Albany) at 8pm on Saturday, June 27. Admission is free. Jim and his band will also be serving up another free performance at 1pm Sunday, June 28 in Shepard Park on Canada St., Lake George as part of the 22nd annual Lake George Summerfest weekend.

At either place, expect a seriously good time, some great music and a few of Gaudet’s deadly jokes, too.