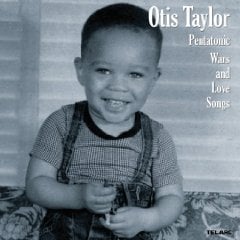 Otis Taylor is simply one of the very best and most adventurous blues practitioners of the day. There’s no doubt that the man is a blues minimalist, and yet he somehow manages to wring as much emotion and complexity from a simple two-chord vamp as you’re likely to find in any contemporary symphony.

Last year, Taylor hit his highwater mark with the stunning “Recapturing the Banjo,” in which he and stellar batch of guests – Corey Harris, Guy Davis (both in town just last week), Alvin Younblood Hart, Don Vappie and Keb’ Mo’ – took the banjo out of its white southern hillbilly stereotype and reclaimed it for its African-American roots.

This time around, Taylor delves into love as his central theme, but of course, these aren’t the usual croonin’ ’bout the June moon kind of love songs. These are love songs on Taylor’s own terms – dark, intense and unflinching.

And while the music still fits under the broad umbrella of the blues, Taylor leans heavily in a jazz direction thanks to the haunting cornet playing of Ron Miles and the sparkling piano playing of the great Jason Moran.

Irish blues-rock guitar hero Gary Moore slashes through three tunes here (he’s mesmerizing on the closing “If You Hope”), and Taylor’s daughter, bassist Cassie Taylor, takes over the lead vocal chores from her dad to great effect on several selections.

This isn’t the album that straight-up blues fans might have been hoping for from Taylor, and it is undeniably one of his finest efforts, as he continues to make more from less.

INTERVIEW: The magic of Gary Burton and guitars