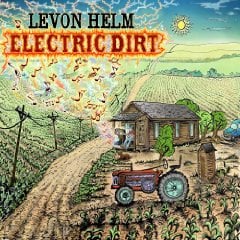 Is this the plugged-in follow-up to Helm’s previous Grammy-winning album, “Dirt Farmer”? Or is it a kind of dehydrated response to Muddy Waters’ classic “Electric Mud”?

Helm is back in full force after overcoming throat cancer and insurmountable odds, and believe it or not, his ever distinctive, soulful Arkansas drawl of a voice sounds as good as it ever has. And that’s saying something.

Once again produced by guitarist/multi-instrumentalist Larry Campbell, the album showcases a number of notable covers, including the rousing lead-off rendition of the Grateful Dead’s “Tennessee Jed” and a spare, stripped-down version of fellow Woodstocker Happy Traum’s “Golden Bird.”

But what is truly glorious here are a pair of tunes that reunite Helm with New Orleans music master Allen Toussaint, who wrote the horn arrangements for the Band’s classic “Life Is a Carnival” and the live “Rock of Ages” double album.

On “Electric Dirt,” they join forces for the joyous “I Wish I Knew How It Would Feel to Be Free” and Randy Newman’s wry “Kingfish,” with the Levon Helm Band horn section blowing with a loose and undeniably funky French Quarter swagger.

Be Here Now: The Village People @ Alive at 5