Song of the Week: In Bb 2.0 – Remixable Video Music

My friend Jeff Sampson sent this link – a set of Youtube videos (including a banjo played with an ebow!!) that create infinite permutations of a collaborative musical creation. The results are enchanting, and it’s amazing to me how all of these disparate tracks manage to work together to create these endless soundscapes. 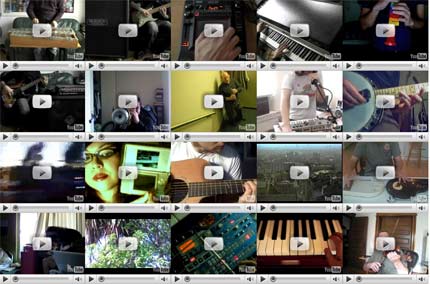 Q. How did you come up with the idea for In Bb?

A. I was making a site with embedded YouTube videos (as a complement to this blog post) when I realized that YouTube doesn’t stop the user from running more than one video at a time. I was curious to see if there was a musical way to explore that concept, so I recorded some instrumental videos and eventually came up with In Bb v1.

Q. Who wrote the music of In Bb?

A. Interesting question! I think the traditional concept of authorship doesn’t really apply here. You wrote it, the participants wrote it, I wrote it. For lack of a better idea, if you need to credit the music, it would probably be best to say “by inbflat.net”.

Q. Is In Bb a tribute to Terry Riley?

A. Absolutely. Terry Riley is one of my favorite composers. Songs For The Ten Voices Of The Two Prophets is a desert island disc for me.

Oh but wait there’s more (apologies to the late Billy Mays) Darren Solomon, the creator of in Bb, is also the producer and writer behind Science For Girls, a melange of jazz, electronica and Brazillian that is waaaaaaay cool, well produced, fantastic vocals, catchy…

Take It From The Top: Jane Siberry