Oh sure, in the battle for supremacy and bragging rights as the Best Disco Band Ever, the Village People might have the edge in the best dance craze category.

But do they they have their own postage stamps?

No, I didn’t think so, but the Bee Gees do – a set of 8 stamps released last Wednesday, July 1. 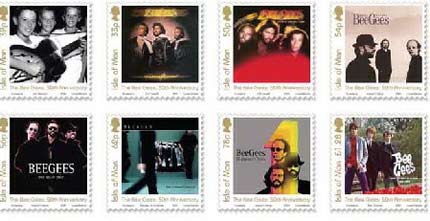 This isn’t the first time the Bee Gees have been honored with a set of stamp issues – back in 1999, The Isle of Man issued a set of six stamps to honor the songs Massachusetts, Words, I’ve Gotta Get A Message To You, Saturday Night Fever, Immortality and Stayin’ Alive. This time, they’re also getting their own crown coin as well.

In fact, the Bee Gees share the distinction, with AC/DC, The Backstreet Boys, The Bee Gees, The Beatles, The Doors, Freddie Mercury, KISS, Madonna, Metallica, Queen and the Rolling Stones, of being on “illegal stamp issues” from The Ivory Coast. That’s right – not only do they have two sets of official stamp issues, they’re also on a fake issue meant to bamboozle stamp collectors. That’s success, eh?