“Lonely Are the Brave”

We here at Nippertown.com are rejoicing today.

Yes, finally – finally – one of our all-time favorite films is being released on DVD, and we won’t have to settle for watching our badly beat-up 1985 VHS copy.

“Lonely Are the Brave” is a classic modern-day existential western (or at least it was modern day when it hit movie theaters back in 1962). Starring Kirk Douglas in what he has declared to be the favorite film of his career, the David Miller-directed movie was shot in black and white, heightening the air of quiet desperation in the screenplay by the great Dalton Trumbo.

There’s a great cast, too. In addition to Douglas, the film features Gena Rowlands, George Kennedy, Walter Matthau, Carroll O’Connor, William Schallert and even Bill Bixby in a bit part.

It’s unbelievable that this movie hasn’t been available on DVD before this, but at least it is now, so I’ll stop bitching and moaning about it. Now if only somebody would release a few more of our favorite films on DVD before the format becomes completely extinct. 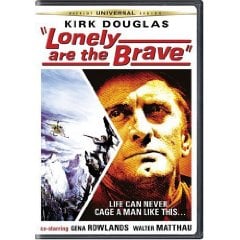 Lonely are the Brave

The book on Sol LeWitt