LIVE: The Cowsills keep it all in the family

The Cowsills rolled into Nippertown on Wednesday, July 8, to headline the Empire State Plaza Food Festival, and as they hit the stage, a rainbow lit up the sky. You can read my review in the Times Union. 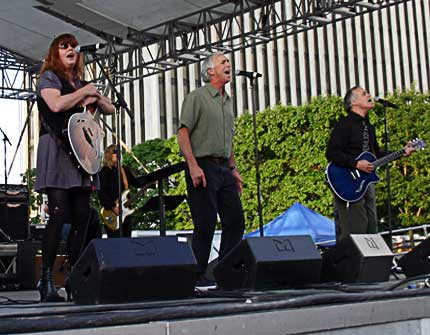 Here are a few additional tidbits about the band and their show:

No, the ’60s family sunshine-pop band never recorded the theme song for “All in the Family,” but they did sing the theme for another TV show – ABC-TV’s “Love, American Style,” which launched in 1969.

Pop songwriter Tony Romeo penned several of the songs the Cowsills performed (“Poor Baby,” “Indian Lake” and, of course, the Partridge Family classic “I Think I Love You”), and two of Tony’s cousins were in the audience on Wednesday.

The Cowsills’ most recent album is “Global,” which was released back in 1998. None of those songs were performed in concert in Albany.

The Cowsills landed three Top 10 hits – “The Rain, the Park and Other Things,” “Indian Lake” and “Hair” – before disbanding. Susan Cowsill then went into retirement – at age 12.

Another original member of the Cowsills is still active in the music business. John Cowsill wasn’t performing with his brothers and sister in Albany because he was on the road as the drummer for the Beach Boys.

Monday, Monday (Mamas & the Papas)
Deliver Me
We Can Fly
Most of All
The Rain, the Park and Other Things
You in My Mind
Bitter Jest
The River of Love
Helplessly Hoping (Crosby, Stills & Nash)
Love, American Style
I Think I Love You (the Partridge Family)
Indian Lake
Be My Baby (the Ronettes)
Just Believe It
Poor Baby
Hair