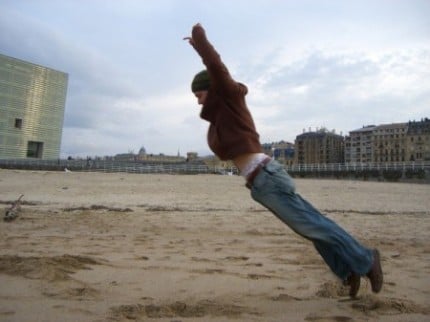 Here’s a bit of Murphy’s story in his own words:

“I was born in 1986 and raised in the Northern Adirondacks. I began playing piano and saxophone in elementary school, then dropped piano, then learned bass guitar in high school.

“Though I’d never played guitar, I knew I needed one in order to figure out the melodies I’d been humming. Initially, I learned a ton from tabs – Phil Ochs, Bob Dylan, the Beatles and a slew of Canadian bands like the Tragically Hip, Moist and I Mother Earth.

“After I’d written and recorded a few of my own songs, my dad asked if I’d been listening to Tim Buckley. His was a name I didn’t know. Then, when my dad bought ‘Happy Sad’ for me, an entirely new sense of and interest in music was ushered in. I’ve never tried to mimic him; if any similarities are apparent, they are out of profound admiration for him.

“After high school, I went to Allegheny College, spent a year in Spain, and graduated with a degree in Spanish. Until recently, I was at Ohio State’s MFA program in poetry. I left the program early to come work at The Sheep Meadow Press, a non-profit poetry press in Rhinebeck.”