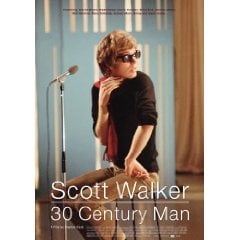 Directed by Stephen Kijak, this feature-length career-retrospective documentary tries to simultaneously mythologize the singer-songwriter and also to peel back the veil of mystery that’s surrounded him since his days as the most brooding pop star of England’s Swinging ’60s.

His big booming baritone croon made Scott Walker a bonafide ’60s superstar in Britain as the lead vocalist of the Walker Brothers. It was a decidedly ironic situation as the band was, in fact, American; no one in the band was named Walker; and none of them were brothers, either.

Walker Brothers’ classics like “Make It Easy on Yourself” and “The Sun Ain’t Gonna Shine Anymore” only hinted at the melancholy grandeur that he would conjure up with his early art-house solo stuff – including a penchant for the dark cabaret sounds of Jacques Brel.

And those early solo albums were only signposts along the way to the thoroughly avant garde sonic experiments that the reclusive, enigmatic singer-composer conjured up on recent albums like “Tilt” and “The Drift.”

This film certainly puts Walker on a pedestal, but for the first time, fans get to hear Walker explaining much of the music and motives in his own voice. And it’s a truly fascinating tale.

There are plenty of vintage teen pop-star TV clips of the Walker Brothers, but there is also some marvelously mystifying footage of Walker in the recording studio, trying to capture elusive, ephemeral sounds for “The Drift.”

David Bowie served as executive producer of the film, and also appears on camera to discuss the importance and influence of Walker’s music. So, too, do a whole raft-load of musicians, including Brian Eno, Richard Hawley, the members of Radiohead, Johnny Marr, Marc Almond, Damon Albarn, Lulu, Sting, Ute Lemper, Alison Goldfrappe and others.

Die-hard Scott Walker fans (and there are no other kind), as well as those who’ve only heard about him, are both gonna want to see this film. Then you can decide for yourself where you want to place Scott Walker in your own personal rock pantheon.