A ballad singer without peer, Scott still has the delicate, ethereal voice of an angel. And despite a lifetime of hard luck and disappoint, he remains almost impossibly optimistic.

“Of course, you’ve got to really love the music,” he says in a soft and gentle voice. “So many singers just do it because there’s a show to be done. No, for me it has a little more value than that. For me, it’s all about good music and what that music is projecting. Is it projecting good or happiness? Is it awakening the soul of a man? That’s what’s important. 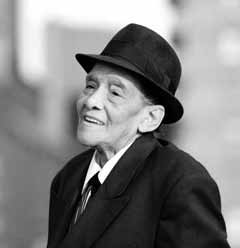 “After all these years, my goodness, if I didn’t get anything more out of it than just the glamour, I’d be lost.”

Back in 2003, it looked as though Scott was about to finally get the kind of widespread recognition that he’s deserved for so long. After more than a half century of being admired by his fellow musicians and a small, but rabidly devoted cult following of hipsters, Scott was finally coming into his own.

There was “Jimmy Scott: If You Only Knew,” a documentary feature film directed by Matthew Buzzell. There was his gorgeous “But Beautiful” CD of jazz standards, released on Milestone Records. And there was “Faith in Time: The Life of Jimmy Scott,” an insightful biography written by David Ritz.

While the cross-promotional assault created a bit of a buzz around Scott, it failed to thrust him into the mainstream spotlight. But he’s used to disappointment. Scott’s life has been less than idyllic, but somehow he has managed to translate his tragedies into music.

One of ten children, he was diagnosed at an early age with Kallman’s Syndrome, a rare hormonal deficiency which restricted his growth and prevented the onset of puberty, which resulted in the high-pitched, eerily androgynous voice that he has to this day.

At the age of 13, his mother was killed in an automobile accident, and he and his brothers and sisters were scattered across various foster homes.

Scott first stepped into the national spotlight nearly 60 years ago, when he recorded his most famous song, “Everybody’s Somebody’s Fool,” with Lionel Hampton’s big band. In 1950, the record stayed on the Billboard rhythm & blues chart for six weeks, climbing as high as No. 6. Credited simply to “Lionel Hampton, Vocal with Orchestra,” the recording was to be Scott’s only hit.

His early solo career was beset by more bad luck, bad management and bad record company contracts. In what seemed certain to finally launch a big comeback for him, Scott recorded the lushly romantic album, “Falling in Love Is Wonderful” in 1963 for Ray Charles’ new label, Tangerine.

But Scott’s former label, Savoy Records, claimed that he was still under contract to them, and the album was pulled from shelves almost immediately. One of the most sought-after recordings of all-time by jazz fans, the album was finally re-released in 2002 in a limited edition on the Rhino Handmade label.

“Well, it was 39 years that they held that up,” he says with more resignation than anger. “And it was all on a bluff. On a bluff, man. Savoy had no contract with me … nothing. But they scared everyone else off because there weren’t a lot of folks who knew all the technicalities of show business law back then. Savoy put the bluff on and got away with it.”

The contract dispute derailed Scott’s career. And although he continued to sing on occasion, he couldn’t make a living at it, so he found work in a variety of jobs from dishwasher to shipping clerk to convalescent home nurse.

“Hey, what are you gonna do? Sit down and cry? Tell me about it,” Scott says with surprising matter-of-factness. “That sort of thing goes on in life. OK, I’ve experienced it, but hopefully some of these other younger singers and musicians will learn from it so they don’t have to go through it themselves.”

Scott’s musical comeback finally began in earnest when record executive Seymour Stein heard him sing at the funeral of famed songwriter Doc Pomus back in 1991. “The next day, this cat from Warners comes over with a contract,” Scott recalls. “It was like Doc’s hand reaching out from the grave.”

The result was the stunning CD “All the Way,” and Scott’s star began to rise.

Lou Reed hired him for his “Magic and Loss” album and subsequent tour. David Lynch hired him to sing on his “Twin Peaks” television series and the soundtrack of his ’92 movie, “Twin Peaks: Fire Walk With Me.” He popped up on the soundtracks for “Glengarry Glen Ross” and “Rage in Harlem.” Madonna put him in the video for her 1994 hit, “Secret.” He not only sang on the soundtrack, but also took a turn acting in the film “Chelsea Walls,” directed by Ethan Hawke.

Throughout the ’90s Scott recorded a couple of more album for Warner Bros. and a breathtaking 1998 album for Artists’ Only! Records, which found him tackling more contemporary pop songs by such songwriters as Bryan Ferry, Elton John, Prince and Elvis Costello.

“That was fun,” Scott says. “When you take some of the contemporary songs like ‘Slave to Love’ and ‘Holding Back the Years,’ you say, ‘Well, what can I do with this if I take it in a rhythm and blues vein or a ballad vein?’ And I tested them out within my own mind to see what I could do with them. I just tried to find the value in the music.”

More recently, Scott has concentrated his still considerable interpretive talents on jazz standards with such Milestone Records’ albums as “Mood Indigo,” “Over the Rainbow” and “Moonglow.”

“The lyrics are important … very important,” Scott insists. “What is the song saying to the people? I’ve worked through all kinds of themes of songs. Having it be of some importance, having it be a thoughtful suggestion to the people … that’s the important thing for me.

“The lyrics are telling a story. And as a singer, you tell the story properly or just forget it. A lot of performers don’t tell the story. They just get up and sing. But then the lyric has no meaning to it, and if it has no meaning, the song won’t touch me. I like to concentrate on the story of the lyrics, and by singing them, tell the people how the music has touched my life in some way. Each song is a life story.”

Scott’s life has known more than its fair share of tragedy, but always looking for the silver lining, he says that’s only made his successes all the sweeter.

“Babe, I’ve enjoyed every minute of it … the good and the bad. The wait has been worth it, I’ll say that,” he says without a trace of bitterness. “Of course, many times you get disappointed because your shot hasn’t come. But is that a reason to give up? I’d advise, ‘Hey, no. No. No.’ You never give up, babe. Give out a little, but don’t give up.”