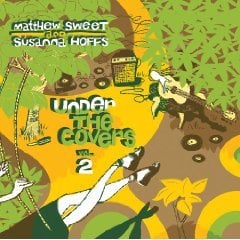 (Shout Factory, 2009): Standing there watching the Cowsills in concert at the Empire State Plaza a few weeks ago, Sara complimented Susan Cowsill by suggesting that she sounded like Lonesome Val Haynes. I agreed, and hyphenated the assessment to Lonesome Val-meets-Susanna Hoffs.

The next day, I walked into the WAMC radio station, where Ray Graf handed me this album without any prompting whatsoever. It felt kinda cosmic.

As you might guess from the album title, this is the second go-round for the tandem of indie-popster Sweet and Bangles front-gal Hoffs. I liked the first disc (featuring covers of such ’60s gems as the Left Banke’s “She May Call You Up Tonight,” the Beach Boys’ “The Warmth of the Sun,” Love’s “Alone Again Or” and Sandy Denny’s “Who Knows Where the Time Goes”), and I like this collection of ’70s covers, too – mostly.

It’s a serious kick to hear a female voice tackle the Raspberries’ spectacularly overheated “Go All the Way.” And Hoffs wisely plays it right down the middle – not too demure nor too salacious.

She also does an intoxicating job on both Derek & the Dominos’ “Bell Bottom Blues” and Bread’s “Everything I Own” – which is about as much of a pop genre-stretch as you can make.

Fleetwood Mac’s “Second Hand News” is an obvious selection, as Sweet and Hoffs seem to be setting themselves up as a 21st century Buckingham-Nicks musical tag team. But they up the ante here by snagging Buckingham himself to play guitar. They do the same with Steve Howe on Yes’ “I’ve Seen All Good People/Your Move,” and the next best thing with George Harrison’s son Dhani on Harrison’s “Beware of Darkness.”

Unfortunately, all of the selections don’t work. The Dead’s “Sugar Magnolia” simply doesn’t take off, and Hoffs pushes too hard on Rod Stewart’s “Maggie May.”

She also doesn’t really do much with Carly Simon’s “You’re So Vain,” and that’s the biggest problem with this disc. Sweet ‘n’ Hoffs adhere far too closely to the original recordings. The arrangements are too faithful, and as a result, the recordings are too reverential.

Hopefully next time around – and there definitely should be a next time – they’ll stretch out their interpretations. Or better yet, how about serving up some original tunes?

Matthew Sweet and Susanna Hoffs: Under The Covers: Vol. 2

Adam Schlesinger: A Man for All (Awards) Seasons