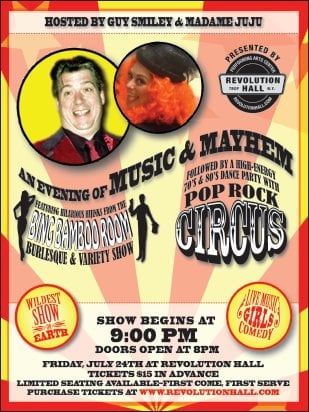 It difficult to predict just what you’ll see when emcee Guy Smiley steps up to introduce a performance of the Bing Bamboo Room Burlesque and Variety Show. But whatever it is, it’s a pretty safe bet that it’s unlike anything else that you’re likely to find anywhere here in Nippertown.

In short, it’s 21st century vaudeville, and the Bing Bamboo folks are darned good at it. They’ve moved around a bit since their debut performance at Valentine’s nearly five years ago, but now they’ve settled into Savannah’s in Albany, where they perform two shows on the final Monday on each month.

But not this month. Instead of their usual monthly gig, they’re moving their whole sassy and sometimes silly operation over to Revolution Hall in Troy at 9pm on Friday, July 24, where they’ll share the bill with the high-energy dance party band Pop Rock Circus.

We asked founder and head honcho Mr. James to tell us a bit about the Bing Bamboo Room, and what to expect this time around:

NIPPERTOWN: So, the Bing Bamboo Room is moving to Troy for a special evening at Revolution Hall on Friday, July 24. Is this your first time on the other side of the river?
MR. JAMES: No, we played Jason’s Upstairs Bar in Hudson last year. It was during a hurricane, but the place was packed nonetheless.

NIPPERTOWN: Are there any special challenges to moving to a stage that’s so much larger than what you’re used to?
MR. JAMES: Not really. If anything, it allows for acts that we can’t normally do.

NIPPERTOWN: Who will be some of your headline acts at Revolution Hall?
MR. JAMES: Guy Smiley, Jeffery Jene, Xzavier, Scooter Pie, Madame Trixie and her dolls, Shilly-Shally.

NIPPERTOWN: You’ll be splitting the bill with a rock group, Pop Rock Circus, at Revolution Hall. Is this the first time that the Bing Bamboo Room has rocked out?
MR. JAMES: We have had several bands play at our shows in the past. Scotty Mac and the Gold Tops, the jazz band from the Ringling Brothers Circus, and we have even had some crazy jug band, if you can imagine that!

NIPPERTOWN: Is the Revolution Hall show in addition to your regular last Monday of the month show at Savannah’s?
MR. JAMES: No, not this month. We will back at Savannah’s on August 31.