When Mark Eitzel wrote on his blog that his current just me-and-my-piano-player tour was “a kind of a Tony Bennett thing,” I had no idea that he meant it literally.

So it was something of a surprise when the American Music Club frontman launched his concert at The Linda on Tuesday, July 23 with “I Left My Heart in San Francisco.” 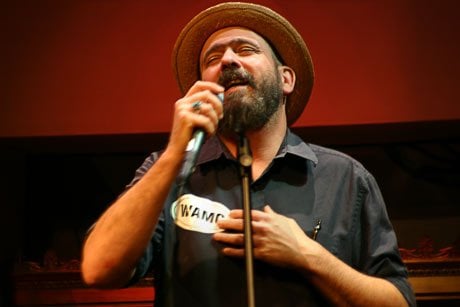 Eitzel, it seems, leaves at least a bit of his heart wherever he goes. And while the crowd of fewer than three dozen was embarrassingly small, they were the faithful. The devoted. And when they hooted and hollered for one more at the end of the night, Eitzel and pianist Marc Capelle graciously returned to reward them with “Johnny Mathis’ Feet.”

The references to old-school crooners Bennett and Mathis were not mere coincidence. They are the roots of Eitzel’s vocal stylings, though his lyrics tend more toward the poetry of Leonard Cohen.

Eitzel has dubbed the tour “Mark Eitzel Performs American Music Club,” and AMC gems were sprinkled liberally throughout the show, from “Decibels and Little Pills” to “The Thorn in My Side Is Gone” to the epic “Patriot’s Heart” with an extended a cappella intro.

But there was more to it than just AMC. He offered songs from his solo repertoire; the despairing “Mission Rock Resort” and “Last Harbor” were highlights. And “Myopic Books” – with lyrical references stretching from Dinosaur Jr. to Saul Bellow – was both wry and heartbreaking.

Eitzel also served up a choice selection of cover tunes. He put a gay spin on the old Billy Paul cheating song by singing “Me and Mr. Jones,” dropping to his knees in a melodramtic plea. And he couldn’t quite get through his show-closing rendition of Kris Kristofferson’s “For the Good Times” without cracking a few chuckles over Capelle’s arpeggios.

But when he played it straight – the Dusty Springfield nugget “No Easy Way Down” penned by Goffin-King – he was nothing short of magnificent.

Among the new material that he included, “I Live in This Place” was a stand-out. Devastating, intense and forlorn, the song was plucked from an as-yet-unproduced stage musical that Eitzel has composed. Sure would love to hear more…

There must be something in the July air, but Eitzel’s intimate, yet stunning performance is the third show of the past week – along with Dave Alvin and Maxwell – that is certain to land a spot on my best-of-the-year list.

MARK EITZEL SET LIST
I Left My Heart in San Francisco
Mission Rock Resort
Decibels and Little Pills
No Easy Way Down
The Thorn in My Side Is Gone
Me and Mr. Jones (Me and Mrs. Jones)
???
I Live in This Place?
Patriot’s Heart
Nightwatchman
Myopic Books
Windows on the World
Last Harbor
For the Good Times
ENCORE
Johnny Mathis’ Feet