SARAH BORGES & THE BROKEN SINGLES’ “The Stars Are Out” 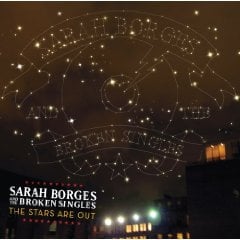 (Sugar Hill, 2009): Sarah Borges and her band the Broken Singles started out squarely in the alt-country camp with their ’05 debut album, “Sliver City.” But from the opening volley of their recently released third disc, “The Stars Are Out,” it’s clear that the band is shifting away from country and toward a bolder pop-rock sound.

And that’s not a bad thing. Not at all.

The new album splits the difference between originals and covers – five of each. It’s the album’s opening track – Borges’ revved-up “Do It for Free,” sounding like a Joan Jett outtake – that seems to be attracting the most attention at radio stations like WEXT. (Oh wait a minute, there aren’t really any radio stations like WEXT, are there?)

But it’s Borges’ keen selection of covers that stands out there. She swings through the spectrum that encompasses Any Trouble’s “Yesterday’s Love,” Magnetic Fields’ “No One Will Ever Love You,” the Lemonheads’ “Ride With Me” and NRBQ’s “It Comes to Me Naturally.”

But the real winner here is her unerring stroll through Smokey Robinson’s “Being With You.” Smart, sexy and determined.

This is one of my fave albums of the year so far. Great summer driving music. Actually, it’s just great any-time music.

Sarah Borges & the Broken Singles perform at the Horseshoe Inn in Saratoga Springs at 4pm on Sunday, July 26.

Sarah Borges & The Broken Singles: The Stars Are Out