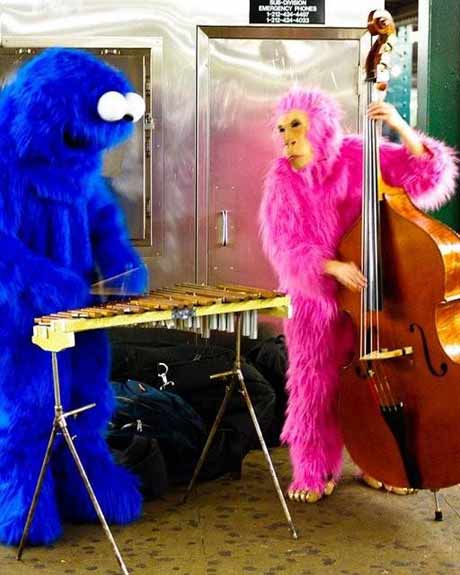 OK, this is just a hunch on my part because I’ve never seen them perform, but I’m willing to bet the farm that the Xylopholks will be serving up one of the most unique and downright fun musical events of the summer when play the Berkshire Fringe at 7pm Wednesday, August 5.

The Brooklyn-based ensemble will play a free half-hour show as part of the Fringe’s :30 Live! concert series held at Bard College at Simon’s Rock in Great Barrington, Mass.

Here’s the description from the band’s MySpace page:

“The XYLOPHOLKS are a dynamic group of musicians who mostly play novelty ragtime music from the 1920’s (featuring the xylophone!). They do so while wearing furry animal costumes. The XYLOPHOLKS wish to make people happy and perhaps even dance.”

The Xylopholks are a truly underground band – best known throughout NYC for their impromptu subway station performances – so the opportunity to see them outside of their native habitat is a rare occurance indeed.

It might also be the last time to catch them in concert for quite a long while. Bandleader and master xylophonist Jonathan “Skunky” Singer was recently awarded a Fulbright Scholarship, and this fall, he’s headed to India for nine months to continue his studies of South Indian classical music.

Here’s an interview and a video of them playing on a subway platform.