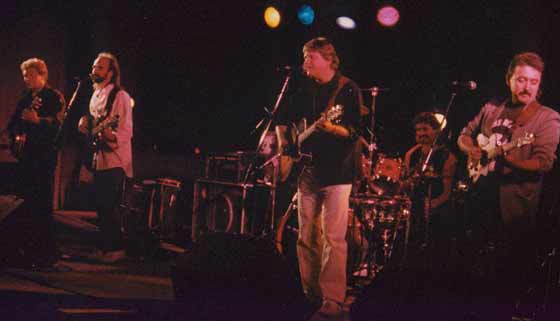 Yes, a week ago the Stony Creek Band was the toast of Nippertown, serving up their trademark rustic Adirondack sound live all across the nation on NBC-TV’s “The Today Show.” The Lake George vacation segment was broadcast live from the Sagamore Resort, and the SCB had co-hosts Ann Curry and Meredith Vieirra kicking up their heels.

So we though we’d ask some of the guys in the band what it felt like to finally make their national television debut after more than three decades of playing together:

JOHN STRONG (guitar, vocals): “Living in Lake George, there’s a very big buzz about ‘The Today Show’ segment – getting a lot of hearty congrats from many, many people in town. There have also been calls from California, Pennsylvania, NYC, Boston etc. It’s a nice lift for the band – so many people who have known us for a long time thought it an excellent choice for the Stony Creek Band to represent the area, and it seems to have worked out well.

A lot of friends were present at the Sagamore, including including management and employees with whom we’ve had a long term relationship. A lot of the boat crowd were blowing their horns for the band’s appearance. too.

I went to play golf Monday afternoon, and I think most of the people at Queensbury Country Club had seen the show. Even the mayor gave me a bigger than normal greeting. Nice to be King for a Day.

DAVE MASWICK (bass, vocals): “We were laughing about all of the attention we’ve received as a result of our ‘Today Show’ appearance.

Over the 30+ year history of the band we’ve been on national radio, had a song in a movie, played for a gubernatorial inauguration, been written about in the New York Times, played many high profile music festivals, played every roadhouse and joint from Maine to Florida, been the subject of feature articles in magazines and now, have appeared on national television.

But seriously…..although, judging by the fact that there is a Staples and Home Depot in every town in the country, you wouldn’t think that America still has regional culture and music, but it’s out there….from the Cajuns in southwest Louisiana to the tejano of Texas and beyond. We continue to be honored each time we’re asked to represent the music of our little part of the world.”

Last week, we shared ’em with the whole country. This week the Stony Creek Band is back in their own backyard.