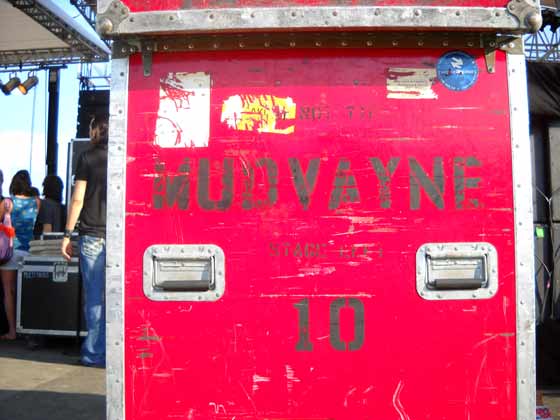 Sometimes you just need a little headbangin’ to clear away the cobwebs.

And yeah, I suppose that I could have waited for AC/DC on Sunday night. But sometimes when ya gotta go, ya just gotta go. So my old pal Snayle roared into town, picked me up late Saturday afternoon, and we headed off to the Edgefest blast at the Altamont Fairgrounds.

There was a flotilla of tour buses lining both sides of the backstage pathway, and we knew right away that we had found the Mudvayne contingent because singer Chad Gray’s gorilla suit was hanging from the rear-view mirror. 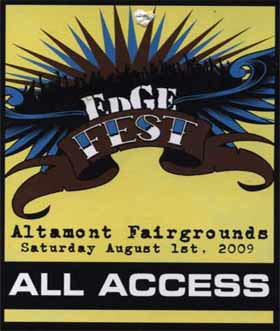 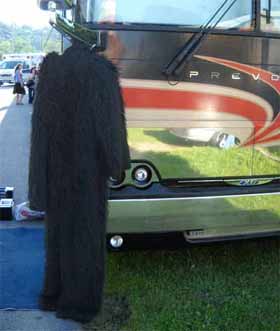 By the time we finally got to the stage, we had missed most of the preliminaries, but arrived in time for Zakk Wylde’s Black Label Society in all of their squealing, squonky guitaronics and biker fashion-wear.

Then it was time for Mudvayne, and believe me, this is a mighty strange band to be watching in broad daylight. Chad had wrapped himself up in his gorilla suit and decorated his face with an especially realistic splattering of fake blood. Yeah, apparently that’s what the cool nu-metal bands are wearing these days.

Despite a few technical problems, Mudvayne tore through a monster hour-long headline set, and it was everything that you’d hope for – ferocious, punishing and utterly relentless. Highlights included go-for-the-throat, no-holds-barred renditions of such brutal gems as “Nothing to Gein” and “Happy?”

But that was really only half of our head-banging excursion to the land of Edgefest. After the show was over, we ended up hanging out backstage with the ‘Vayne, their crew and a few friends for about two and a half hours.

We were just chillin’ and doin’ the rock ‘n’ roll hang:

…chatting with Shadows Fall drummer Jason Bittner and his lovely wife about his band’s upcoming album and tour.

…lounging in the back room of the tour bus as Chad played us a half dozen new tunes that the band recently recorded down in Texas, while Mudvayne guitarist Greg Tribbett was racking up a serious online poker jackpot.

And after all of that rockin’ and hangin’, we were still home in time to catch the 11 o’clock news. On a Saturday night, no less!

Gayle Miller is a photographer based in Bronxville, NY.