Real Good For Free: “A Crimson Grail” at Lincoln Center 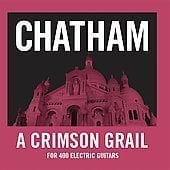 Originally scheduled to be performed last summer but canceled for safety reasons after a storm drenched Damrosch Park right before showtime, Rhys Chatham’s “A Crimson Grail” will finally be performed outside at New York City’s Lincoln Center this Saturday, August 8. The organizers have prepared for any kind of weather, they say, so come hell or high water, the show will go on.

The piece will be performed by 16 bassists and 200 guitarists, including former Nippertown resident Richard Lainhart, who notes that “in spite of the fact that the minimum amp requirement is 60 watts (therefore 216×60 = at least 12,960 watts), I don’t think it’s going to be all that loud. On the other hand, it could sound like riding a New York subway train with the windows open through the Gulf War – we’ll see.”

Listen to A Crimson Grail

Pitchfork review of A Crimson Grail

Blogcritics.org review of A Crimson Grail

A Crimson Grail at Amazon.com