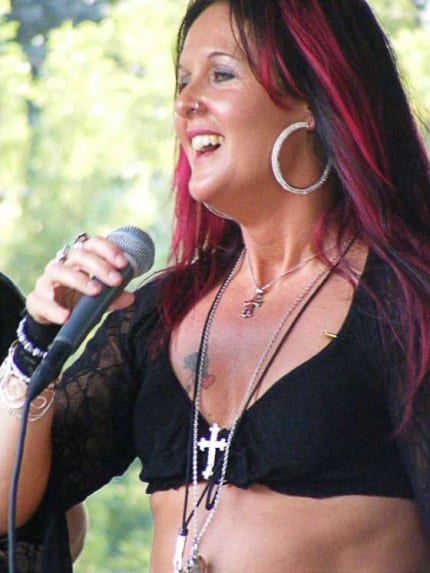 When Mike and The Monsters approached Troy event organizer Vito Ciccarelli three summers ago he was skeptical at best. All that changed when he gave the rock band an early slot on last year’s Uncle Sam Jam, where they won over the audience.

Based on this crowd pleasing set the band was booked, on the spot, for this year’s Powers Park free concert series. Michaele Ann (AKA “Mike”) along with husband Rick Borecki on drums form the core of this cover band on the rise. They are ably backed by such veteran area players as guitarist Ron Urbaetis, bassist John Dodge and former Blacksmith guitar hero Dave Smith.

The sunny Saturday held. The lawn chairs appeared. Snowman vended. Vito emceed, and Mike delivered. The Monsters covers ran the gamut from reworked new wave nuggets like Nena’s “99 Red Balloons” to current radio tunes such as Pink’s “U and UR Hand,” but where the band distinguishes itself is on hard rock gems: The Scorpions’ “Rock You Like a Hurricane,” Guns N’ Roses’ “Paradise City” and a show-stopping version of Led Zeppelin’s “Whole Lotta Love.”

The Monsters have just released their debut CD “Live at the Revolution” recorded at Troy’s own Revolution Hall.

Song of the Week: Dream Letter