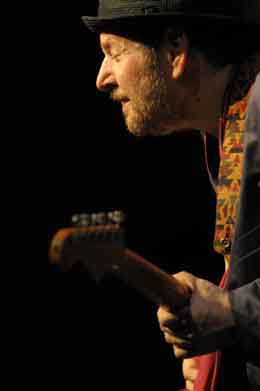 Some musicians just play the blues.

Not guitarslinger Ronnie Earl. He’s lived the blues, and he’s somehow managed to survive the tough times and come back out on top.

At The Linda on Saturday, August 8, Earl spoke from the stage about his alcoholism and about being sober 20 years now. He spoke about not touring for almost 10 years because of illness and depression.

The concert was a real event, and everyone seemed to know it. “A couple I spoke with before the concert came up from NYC specifically for this concert. They said Earl hasn’t played there since 1999,” says photographer Andrzej Pilarczyk. “Another couple with kids drove in from Buffalo because evidently this concert was a one-off and not part of a tour.”

Die-hard blues fans in the crowd gave him a standing ovation when he walked out on stage. And at the end, everyone was on their feet chanting for more.

He spent a good portion of the concert walking from the stage and playing to the audience, especially his wife, who was in the crowd. He played a number of jazz selections – including Miles Davis’ “So What” and Bobby Timmons’ “Moanin'” – as well as selections from his new album.

After nearly three hours on stage, Earl ended the evening with a fitting encore – an improvisational electric guitar solo while sitting on a monitor speaker at the front of the stage.