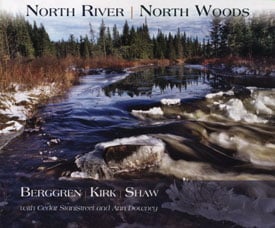 (Sleeping Giant Records, 2009): You don’t have to be a mountain man or woman to enjoy this collection of Adirondack folk music. If you’ve done any camping or hiking in New York State’s great mountains (or even if you’ve just admired the majestic view on postcards), you’re likely to feel connected to this music. Embracing the outdoors and the simple charms of homespun tunes, three of the area’s most beloved songsmiths – Dan Berggren, John Kirk and Christopher Shaw – team up for the first time on this album.

Well, actually, the trio is only playing together on seven of the album’s 17 tracks, but you get the idea because the rest of the selections are duos or solos.

Berggren’s focus is songwriting. While the majority of the tunes are traditional, Berggren contributes a half dozen of his own tunes to the disc, including the captivating spoken word tale of the “Cremation of the Old Floyd Place.”

Kirk’s focus is on the instrumental end of things. The CD showcases the multi-talented player’s considerable skills on fiddle, mandolin, guitar and flute, as well as some fancy clog-dancing percussion on the French Canadian medley of “Reel St. Joseph/Mason’s Apron.”

Shaw, meanwhile, is the strongest vocalist of the bunch, and it’s a shame that he didn’t step up to sing lead more often here. Still, “Ballad of Blue Mountain Lake” is the album’s highlight, and it has more to do with Shaw’s knack for insightful narrative singing than it does with the contributions of such high-profile special guests as Rory Block and the Band’s Garth Hudson.

Put these three veteran musicians together, though, and the whole is greater than the sum of its parts, as evidenced by the deeply heartfelt a cappella offering, “River Driving.”

A few other special guests drop by to add their own seasonings to the mix, including the Finest Kind’s Ann Downey (who steps up to sing “Log Driver’s Waltz”) and fiddle phenom Cedar Stanistreet (who teams up for Kirk for another of the album’s best tracks – the achingly gorgeous twin fiddle lament “Be Thou My Vision”).

The best music is the music that you make yourself – a communion with with friends or strangers. But if you can’t make your music, this might be the next best thing. Come gather ’round the campfire.

Dan Berggren, John Kirk and Christopher Shaw (and Cedar Stanistreet) will celebrate the release of “North River/North Woods” with a concert at the Ndakinna Education Center in Greenfield Center on Saturday, August 15, as part of the ongoing Down to the Earth performance series.

Josh Ritter, What Was the First Album You Ever Bought?