Josh Ritter, What Was the First Album You Ever Bought? 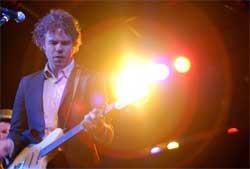 “I got a couple of them. I got ‘Pearl,’ the Janis Joplin record, and I bought ‘Bringing It All Back Home.’ That was after I heard ‘Nashville Skyline,’ which my parents owned. I remember going out and buying those CDs. I thought that was so awesome.

‘Pearl’ was released after she died, but Joplin is just like a bomb on that record. It’s the sound of somebody just exploding on a record.

One reason that I was so attracted to those records is that you could definitely tell that those were real people, and there’s nobody in between telling you what to think of what this is. There’s nobody putting any spin on it.”