Naturally enough, there have been dozens of new books hitting the shelves in the past couple of weeks in celebration of the 40th anniversary of the 1969 Woodstock Festival.

There are two especially interesting books on the fest that both have local Nippertown connections, and fittingly both of them are first-person, oral histories of the event – because, of course, just about everyone who attended the fest has their story to tell about it. 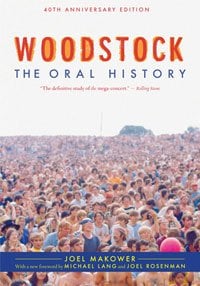 Joel Makower‘s “Woodstock: The Oral History” was originally published two decades ago in celebration of the festival’s 20th anniversary. The new 40th anniversary edition has been published by Excelsior Editions, a division of the Albany-based State University of New York Press.

Back in 1988, Makower criss-crossed the country to conduct face-to-face interviews with more than 70 festival participants – musicians, the producers, local residents, tech and backstage personnel and, of course, the fans. When the original edition was published, Rolling Stone magazine called it “the definitive story of the mega-concert.”

The new edition includes new forewords by co-producers Michael Lang and Joel Rosenman, but it’s Makower’s original interviews that are the real reason to celbrate the fact that this book is back in print again. 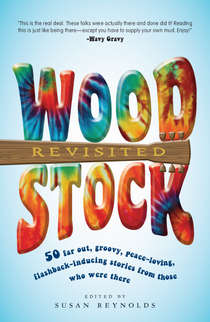 Meanwhile, “Woodstock Revisited” (published by Adams Media) is saddled with the subtitle, “50 far-out, groovy, peace-loving, flashback-inducing stories from those who were there.” Edited by Susan Reynolds, the book focuses on the fans, allowing those who attended the fest the opportunity to write about their own private (and public) experiences during the three days of peace, love and rock & roll.

The reminiscences are short – generally about four or five pages long – and yet it seems that nearly all of the contributors saw the fest from a different perspective, which makes for fascinating reading.

And one of the 50 contributors is Sandy McKnight – local musician-songwriter who plays in the “virtual band” the Ragamuffins of Love and operates the non-profit Columbia Arts Team in Hudson.

At 1:30pm Monday, August 17, editor Susan Reynolds and a dozen others contributors – including McKnight – will be on hand for a two-hour reading, Q&A session and book-signing at the Museum at Bethel Woods’ Events Gallery. Admission is free but admission tickets – available here – are required.

Odds and Ends @ the End of the Week