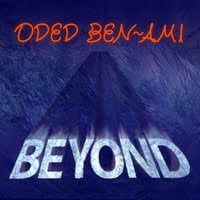 A recent transplant to the Capital Region from NYC, singer-songwriter-pianist Oded Ben-Ami is living his own dreams with the release of his debut album, “Beyond.”

On his website, Ben-Ami declares, “Some of the tracks are songs, some are piano instrumentals. Some are neither.” I’m not exactly sure what he means by that, but the results are intriguing. And intimate.

This is a purposefully minimalistic affair – just Ben-Ami on piano and vocals. No flashy guest stars, no studio gimmickery, no irony, no tricks, no foolin’ around.

He wrote all of the music and most of the lyrics for these dozen songs, and his primary lyrical theme seems to be the corruption of the American dream through conspicuous consumerism.

The songs on the album – especially “Those Happy People,” “Oscar,” the keeping-up-with-the-Jones’ “Way of Sheep” and the angst-ridden, almost crippling “Troubled” – sound as though they belong onstage in an off-Broadway musical about an outsider who can’t conform to society’s norms.

On first listen, I found Ben-Ami’s vocals a little too shakey and not up to the level of his songwriting skills. But the more I listened to the disc, the more he won me over.

I think his somewhat “pitchy” vocals are the perfect voice for this catalog of songs. And there’s something about his phrasing – especially the way his voice trails off at the end of lyrical lines – that unmistakably reminds me of the Incredible String Band.

And that’s certainly not a bad thing at all.