THE WAITIKI 7’s “Adventures in Paradise” 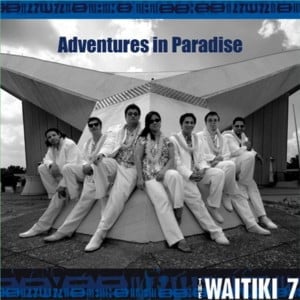 Slip into your grass skirt, drop a paper umbrella into your pineapple-coconut adult beverage and chill out with the tropical Pacific breeze.

Today marks the 50th anniversary of Hawaii’s statehood, and if you’re searching for a soundtrack to your luau-inspired celebration, look no further than the debut disc from exotica revivalists the Waitiki 7.

“Exotica floats in the zone between soundscapes and an early world music hybrid,” explains the band’s bassist-music director Randy Wong, one of three Hawaiian-born members of the Waitiki 7.

Indeed, while elements of a more ambient style surface from time to time on this bakers’ dozen of instrumental tiki-lounge tunes, the major focus is on a more polished fusion of jazz, pop and tropical folk.

And while the W7, of course, pay tribute to such exotica pioneers as Martin Denny – “Manila” and “Left Arm of Buddha” are both Denny compositions – and Les Baxter – represented by the album’s opening track, “Coronation” – this is no mere tribute band.

In fact, seven of the album’s selections are original tunes, including such highlights as the lilting violin-driven “L’ours Chinois” and the zany, cartoon-soundtrack-like “Ned’s Redemption” (which features vibraphonist Jim Benoit switching over to xylophone).

The album is rounded out with a pair of jazz gems – Lee Morgan’s “Totem Pole” and Duke Ellington’s classic “Mood Indigo” – before wrapping up with the album’s title track – Lionel Newman’s theme song for the 1959 network TV series of the same name starring Gardner McKay. Whoa, now there’s a flashback…

The Future of Opera