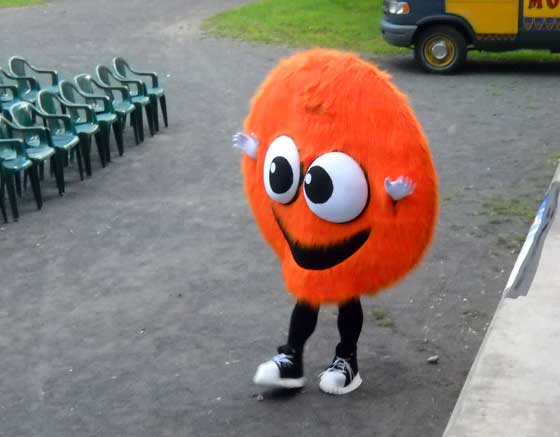 Shortly before it started raining on Sunday night, Nippertown’s latest super fuzzy mascot made his (or her?) official debut at the Music Haven in Schenectady’s Central Park.

Round, bright orange and oh-so-shaggy, the Smile Monster danced out into the crowd for a few moments just prior to the children’s music concert by Ruth “Miss Music Mobile” Pelham and Ramblin Jug Stompers.

Monster then promptly left the park, leaving a non-fuzzy spokesperson to explain that a website would go live today to provide more smiles. Sure enough, somewhere around 2pm, the website appeared. And at least from what we can figure out, the Smile Monster is apparently the mascot for Charles Street Studio, which operates iSmile Studios at Colonie Center.

With its big bulging eyeballs and mile-wide smile, we’re thinking that the Smile Monster doesn’t really look very monster-ish – except in the Cookie Monster sense.

But we sure would love to see a Heavyweight Mascot Match between the Smile Monster and Price Chopper’s Triangle Man. We’re thinking that Smile Monster might have the edge, considering that he’s got all of his fingers and thumbs, while Triangle Man is quite obviously “short-handed” (sorry, I just couldn’t help myself).

Then again, now that we really think about, the Smile Monster might be at quite a disadvantage considering that he’s got…NO ARMS!

Hmmmm… Maybe we could put the Smile Monster vs. Triangle Man on a double bill with the Alex Muro vs. Matthew Loiacono Jell-O wrestling match.

Don King, are you listening…