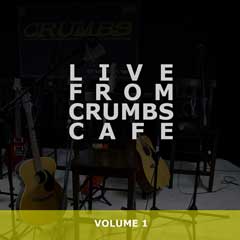 Over the years, there have been a number of compilation discs that basically take an audio snapshot of just where the Nippertown music scene is at any given time, but it’s been quite a while now, so big KUDOS go out out to Mike Guzzo and his CRUMBS compatriots for putting together “Live From CRUMBS Cafe, Volume 1.”

They not only recorded all of this live on their own, but they also managed to get the bands to donate their recordings for free. And then…

And then… CRUMBS offered up all of their hard work for free to anyone who wants to hear it – and own it. That’s right, it’s not just a free stream; it’s a free download – the entire album.

Of course, all of this would be moot if the music wasn’t good. But Guzzo and his pals cherrypicked some of the best bands around. Here’s the track listing and a bit of quick commentary, just in case you don’t believe me:

1. RAILBIRD: “Hold On” – a stripped down Railbird Jr. offering featuring Sarah Pedinotti and Chris Kyle
2. SEAN ROWE: “Surprise” – Resonant neo folk-blues, resonating with echoes of Leonard Cohen and Nick Cave
3. MIKE MATTA: “All You Need” – the Sketchy Indians’ mainman teams up with Amanda Rogers and Ben Karis-Nix for a harmony driven nugget
4. KATIE HAVERLY: “Immunity” – Solo. Torchy. Devastating.
5. THE VELMAS: “This Time” – Both jammy and rocky. Not quite rock; not quite reggae. Totally contagious.
6. THE MARK FREDERICK BAND: “Ain’t So Bad” – Intimate, acoustic blues in the early Hot Tuna pocket. Sharp guitar playing.
7. SIRSY: “Sorry Me” – Acoustic version of the two-person pop band featuring Melanie Krahmer’s intoxicating vocals.
8. MATTHEW LOIACONO: “Modest Birds” – The most subtle solo offering of the disc. And the most touching.
9. BYRDS OF PREY: “Chasing Shadows” – In the song’s acoustic format, the intro is too long, but they manage to establish the groove. And that’s what really counts.
10. RAMBLIN JUG STOMPERS: “Overseas Stomp” – Steven “Cousin” Clyde sells this vintage Lindy hop gem. Oh wait, I play on this one. Never mind…
11. BLACKCAT ELLIOT: “She’s Got Friday Night” – An acoustic variation on the go-for-the-throat power trio revealing the classic song structure in Gus’ songs.
12. THE NIGHTMARE RIVER BAND: “Where Do We Go” – A grand closer. In the traditonal British Music Hall fashion, the NMRB wraps it all up with a ukulele, a whistling solo and some cheery harmonies.

“When we first started recording, it was in a hot, cramped attic space with less than ideal acoustics,'” admits Guzzo, who began recording some of these tracks way back in March, 2007. “Today, the episodes and live performances are recorded in the basement, which is a bit more acoustically sound. As you’re listening to these songs remember that they were recorded under these conditions – and the songs still somehow came out amazing.”

And just in case a digital download of the album isn’t enough for you, you can also get a physical CD from CRUMBS for just $3.

Buddy Guy, What Was the First Album You Ever Bought?