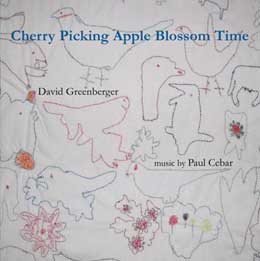 David Greenberger is a masterful artist who knows how to get to the heart of matter of getting older. It seems like such an easy thing – I mean, we all get older every day, don’t we? But you can’t see it in a mirror on a daily basis. It’s an elusive topic, and like water through your hand, it’s difficult to get a grasp on.

Greenberger has got hold of it by the neck, and thankfully he won’t let go. He’s been doing it for three decades now as the writer, editor and all-around office boy at the Duplex Planet, a little homemade magazine that’s grown into something of an empire over the years.

According to Greenberger, the Duplex Planet is “designed to portray a wide variety of real characters who are old or in decline. In our culture, exposure to people at this point in their lives is generally limited to seeing family members age, and, since that points directly to one’s own mortality, it’s hard to glean much in the way of an objective example.”

Greenberger is a musician – former bassist in the Boston-based Men & Volts – intimately aware of the power of music. And over the years, he’s created an amazing collection of spoken-word projects – including collaborations with Los Lobos, NRBQ’s Terry Adams, John Sebastian, members of the Sun Ra Arkestra, Birdsongs of the Mesozoic, 3 Leg Torso and the Shaking Ray Levis.

He simply speaks. Reciting the words of others that he’s collected in interviews over the years, allowing his voice to be heard as the voice of the hundreds of everyday elderly people who we somehow never get a chance to hear.

The tales that he tells are in equal parts hilarious and heartbreaking, and it takes a very empathetic, versatile batch of musicians to find the proper musical balance to match the stories.

Milwaukee music scene veteran Paul Cebar and his band of fellow Milwaukeeans play jump blues, jazz and R&B. And it just so happened that last year, Greenberger found himself as the artist in residence under the auspices of the Center on Aging and Community at the University of Wisconsin-Milwaukee.

The collaboration is sublime.

“The artist residency had a focus on memory loss, and while that’s always figured in my work, it’s never been a primary focus,” Greenberger says. “I knew early on that I couldn’t have a lot of pieces that had ‘I forget’ or broken ideas. And in fact, the people I talked with had many different levels of it from barely noticeable to profoundly so.

“One of my solutions to conveying the idea was to have so many pieces, so that for a listener you couldn’t possibily hold it all in his/her head – but each piece were be resonant and present whilst playing. I wanted to allude to and mirror the idea without constantly swimming in it.”

He does just that during 38 short selections that flow over the course of just over an hour on the new CD.

The music swings and clatters and echoes deep in the recesses of the mind of the listener, reinforcing anecdotes and stories pulled into the light and set in front of the microphone, often for the very first time.

This is sweet, sweet stuff.

Paul Cebar and the Milwaukeeans will play a free show at Shepard Park in Lake George at 7:30pm on Wednesday, August 26. They will be showcasing selections from their latest album, “Tomorrow Sound Now for Yes Music People.” But David Greenberger will also be in attendance at the show, so it’s just possible that we might get to hear a live snippet or two from “Cherry Picking Apple Blossom Time.” That would be soooo cool…