DVD: THE MOODY BLUES’ “Threshold of a Dream: Live at the Isle of Wight Festival” 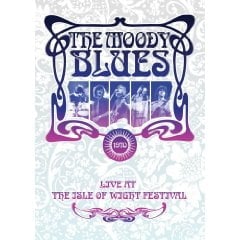 It was 39 years ago, almost to the day, when the Moody Blues invaded the Isle of Wight, churning out their classic/classical rock to an estimated audience of 600,000 fans.

At the time, their new album, “A Question of Balance,” was number one on the British pop charts – no mean feat considering that it was the third album that the Moodies had released in just two years, the others being 1969’s “On the Threshold of a Dream” and “To Our Children’s Children’s Children.”

This newly released DVD captures the performance, or at least most of it. Apparently, some film has not survived the years, so all 14 songs – which can be heard on the CD – didn’t make it onto the DVD. “The Sunset” is included on the DVD, but there’s no footage of the band’s performance, only a montage of crowd shots, which is interesting enough.

But, of course, there’s “Tuesday Afternoon,” “Nights in White Satin,” “Question” and the still mindscrambling “Legend of a Mind.” It’s difficult to remember that there was a time when “Legend of a Mind” could be considered a dramatic show-closer. And the 50-minutes of concert footage wraps up with a time-traveling montage of the band rolling through “Ride My See Saw.”

The DVD opens with a 20-minute segment that intersperses the vintage concert footage with recent interviews with the bandmembers (although Ray Thomas declined to participate), a very brief history of the band and a fascinating look at Pinder’s Mellotron, the musical instrument that gave the Moodys their distinctive, orchestral sound.

And if you want to put the Moodys’ performance into perspective with the rest of what was going on musically speaking, you’ll want to check out Lerner’s overview documentary, “Message To Love: The Isle Of Wight Festival 1970 .”

The Moody Blues – led by Justin Hayward, John Lodge and Graeme Edge – will be making a tour stop at the Saratoga Performing Arts Center in Saratoga Springs on Wednesday (August 26).