Pascal Balthrop (aka, Jemison Thorsby), What Are You Listening To? 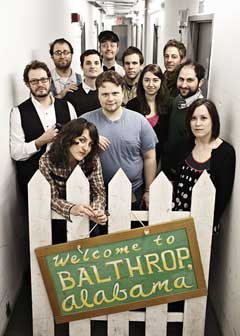 “I can’t stop listening to Midlake‘s ‘Trials of Van Occupanther.’

“There’s a lot of great music coming out of our neighborhood in Brooklyn these days: Rocketship Park, the Ne’er Do Evers, Caithlin De Marrais, the Bandana Splits, Josh Ritter, Dawn Landes and Kyle Fischer.

“And of course, I keep going back to records by Elliott Smith, Arcade Fire, Neutral Milk Hotel and Bright Eyes. Oh, and the Beatles. They were pretty good.”

Pascal Balthrop (aka, Jemison Thorsby) and the rest of the members of his Brooklyn-based band (and small, fictional, southern town) Balthrop, Alabama, will be performing at the Pavillion at MASS MoCA in North Adams, Mass. at 8pm Saturday (August 29).

And you can also tune into “Performance Place” on WAMC-FM at 11:30am today (Wednesday, August 26) to hear an interview and live music from Balthrop, Alabama.