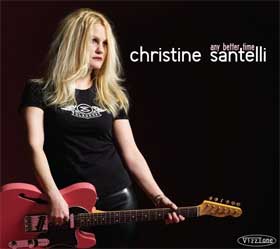 Do you remember the excitement and the sheer electricity of those early shows by Joan Osborne at the Metro? Yes, the pre-“One of Us” hit-bound Joan Osborne. She was deeply rooted in the blues, and yet her musical style was expansive enough to stretch into the realms of rock, Motown and even Captain Beefheart (definitely a realm unto himself).

That’s what Christine Santelli reminds me of on her new album. That special blend of maturity, musical prowess and magic. It just doesn’t come around very often, but she’s got it. She’s got it good.

Santelli was born and raised in Clifton Park, but she doesn’t get back to these parts very often anymore, so this weekend is a real treat, as she makes stops at the Van Dyck in Schenectady on Friday (August 28) and Alchemy in Woodstock on Saturday (August 29).

She’s living in Jersey City these days with husband/drummer Matt Mousseau, and while she hasn’t complete left the blues behind, it’s clear that she’s branching out on her new album.

First of all, she wrote all 13 songs on the album, and between them she displays quite a stylistic stretch. “Down in the Valley,” for example, could be defined as soul-folk. “Butterfly” has that fabulous Brill Building street strut that resonates with the power of Ronnie Spector or Willie DeVille. “Calgary” is a narrative folk song with some fine fingerpicking. “Brown Haired Girl” is jaunty, almost childlike and deceptively simple. “On the Farm” swings into hoedown mode, and then there’s “For You,” an off-kilter, creepy carnival songs that’s the biggest stretch on the album. And it works just fine.

Now 41 years old and armed with a seductive, sultry growl, Santelli has got something to say, and there’s no question that this album is her most personal statement to date.