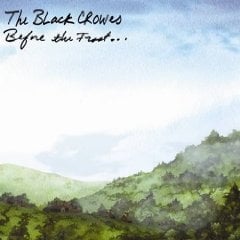 Released this week, the new Black Crowes album, “Before the Frost…,” features all new material recorded over the course of five nights in front of a live audience just down the road in Levon Helm’s Woodstock studio barn. It’s actually a live double-album, as it also includes “…Until the Freeze,” a free bonus download-only album.

“Before the Frost…Until the Freeze” is the second consecutive album that the Black Crowes have made in Woodstock, having previously recorded “Warpaint” at Allaire Studios in 2007.

Here’s a little Q&A with Chris Robinson about the band’s experience in Woodstock and their approach to music in general:

Q: What made you choose Levon Helm’s place to make the record?

A: That kinda happened after the concept of doing something different in terms of size, of vastness, and something that included the live idea in front of our audience. By vastness, I mean being able to do a lot more songs.

On the “Warpaint” tour, we went back to Woodstock for a little break, and I ran into someone who works for Levon, at the health food store in town. If you’re a hippie, you have to go to the health food store in Woodstock, or the police come to your house and question your motives. Levon’s Rambles were definitely on my radar, and we just lucked out that it was happening that weekend. We went down for the show, and I was just blown away. I sat in that night. We had so much fun, and the whole idea of it was something that I felt fit with the Black Crowes’ aesthetic on a lot of levels.

Q: Was it the intimacy, the vibe in that room?

A: A lot of it was just the logistics of what we were trying to pull off. To me, it was “all these things at once” – it’s a studio during the day, and then at night they can reconfigure it to have it be a small concert venue. That was a perfect way for us to learn the material.

The other aspect that was appealing to me is that it’s off the grid, in a way. That’s part of who we are, and what we’ve always been. It’s something that feels handmade – Levon built it himself, and he doesn’t use promoters, and there’s none of the typical inner workings of the business.

Which is fine, but those are also the things that have diluted the rock ‘n’ roll experience for people. People want to see music, and be a part of things, and then they go to concerts and they’re burdened by rules.

The setting, of course, is the third attraction. Because you’re in this beautiful barn. It’s Levon’s home as well as a place to make music, and he’s such a unique, warm and generous, one-of-a-kind musician. He’s also that as a person.

Q: OK, so it’s a great studio. Why bring the audience in? What does that do for you?

We made “Warpaint” in Woodstock, in a different studio up the street, in a rural place on a mountain, private, and it was perfect to get our group together on the same page.

I was definitely inspired to get into even a more rootsy place, in terms of country, bluegrass, country blues and soul music. Stuff that we’ve always been inspired by, but I think, in this term, something to really sink into. Especially with this time and age. Just how we feel about it. It seems like that’s the best way to express those things.

In our case, I also thought it was good for the band as well, in terms of the story of the band. Sort of a living narrative or somethin.’

The people that were there, we didn’t have the random “Hey, I haven’t seen the Black Crowes in a while … I got nothing else to do tonight,” these were hardcore Crowe people who’ve been to numerous shows.

So for us, having the audience there doesn’t make it harder, it just adds a certain level of focus. This was more about immediate communication and response with these people, who are waiting to hear what your new work sounds like. You can’t manipulate that dynamic.

And we didn’t want to do something fake. It wasn’t going to be like some VH-1 TV show.

Q: It’s been 20 years since the first Black Crowes album. Your thoughts on this anniversary?

A: Even though we’ve been through stuff that on the outside looks gratuitous or silly or wasted or whatever, this has been IT for us. We were one group that even as young people, we took responsibility for ourselves. If we fucked something up, we didn’t blame it on anything else. And that’s why we always had such problems with the internal workings of different systematic, corporation-driven, derivative music.

The tradition that we get to live in is very humbling. The idea that we have kept an audience that’s a part of our world, and part of our scene, that keeps growing and changing with us, that’s another thing that very little times is talked about in the music business. “The pursuit of relevancy” is like the dumbest thing I’ve ever heard in my life. That’s just fashion, and keeping up with the Joneses – it’s product and it’s safe.

The music business is stumbling along these days – you can hear the death rattle – and for us, that’s kinda cool, because we’ve always been self-sufficient. And we’ll always have an idea, and always a way to do it that benefits the dynamic of this group.

The Black Crowes: Before the Frost…Until the Freeze

The Black Crowes will be making tour stops at the Saranac Brewery in Utica (Friday, September 11), Higher Ground in Burlington, VT (Thursday, September 17) and the Ulster Performing Arts Center in Kingston (Friday, Sepetember 18).