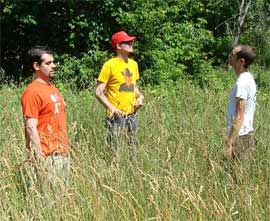 Charlie Everywhere changed their name to Phantogram, burst out of the scene and stirred up some considerable response with their self-titled EP earlier this year.

So who’s the next Sub-Bombin band about to follow in their footsteps?

Could it be Firefighter Font?

Find out on Saturday, September 12, when the Saratoga Springs trio of guitarist Greg Tebbano, drummer Adiro Patten and bassist Damon Cook unleash their debut album, “Crash Tender,” with a wailin’ party at Valentine’s in Albany. Joining in the festivities will be Beware! The Other Head of Science and Saint Ukraine.