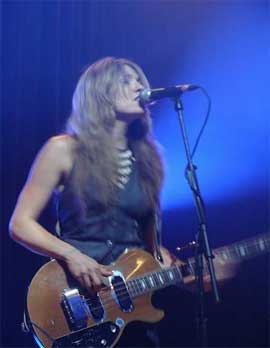 1. THE FIRST ALBUM I EVER BOUGHT WAS … “Hot Rocks,” the Rolling Stones. The neighborhood corner store kept their cassettes in one of those wood veneer cases with the locked plexiglass front. The owner was a suspicious sort and would get annoyed by the kids who came in to gaze at the music selection. I’ll never forget the summer I listened to that tape over and over, to Myrtle Beach and back.

2. THE FIRST CONCERT THAT I EVER SAW WAS … Hall and Oates, Glens Falls Civic Center, when I was nine years old. I couldn’t believe how loud it was.

3. THE FIRST MUSICAL INSTRUMENT I EVER OWNED OR PLAYED WAS … upright piano, after begging for either a piano or a horse. Thanks for indulging me, Mom and Dad!

4. THE FIRST SONG THAT I EVER PERFORMED IN PUBLIC WAS … “The Entertainer” by Scott Joplin, on public access TV when I was maybe 9 or 10.

5. THE FIRST BAND I WAS EVER IN WAS … My town was so small, there was no one to jam with. So I joined the high school jazz band.

Lori Friday and her Super 400 bandmates celebrate the release of their new CD, “Sweet Fist,” at Revolution Hall in Troy on Friday, September 11. And there’s still time to enter to win an autographed copy of the new album from your pals at Nippertown.com. Just go here for details.